The Arix funding engine allows you the flexibility to control how the loan is funded. You can enter instructions and control the rails and the order in which to attempt to fund over those rails. You can also elect to fund different parts of the loan over different rails and supply fallback options if rails fail.

After the loan is approved for funding, Arix initiates funding. The loan passes to the InFunding status and funds are sent using rails.
Note: Any loan update made via a /PUT call is ignored when the loan is InFunding.

There are several rail types you can use, click here for more information. Depending on the rail type, funding results might be immediate or take up to a few days.

After funding, the loan passes through these stages:

Arix generates webhooks which keep you up to date on the loan status.

Based on how the funding progresses, the loan can be in one of these statuses: 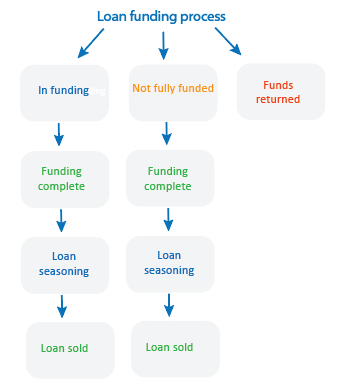 If all the rails are assigned the same priority, Arix works through the rails in the order they were submitted, such as priority 2, priority 3, and so on. If no amount is specified in the request, the funding engine attempts to fund the full loan amount.

In most cases the funding goes smoothly and the funds are fully received by the borrower. However, funding requests can fail immediately or succeed, and then be returned later.

The funding engine continues to process rails until there are no rails left to process.

If after all the rails have been processed there is an outstanding loan balance, the loan status is then updated to NotFullyFunded. When NotFullyFunded, you can submit new funding information.

If the loan is fully funded prior to the last rail, any rails that weren't attempted are labeled Skipped. A message shows in the LoanDetail API explaining the reason for the skipped rail.

If a rail fails, is rejected, or returned, Arix reports a detailed error message as part of the railUpdate webhook and in the LoanDetail API. 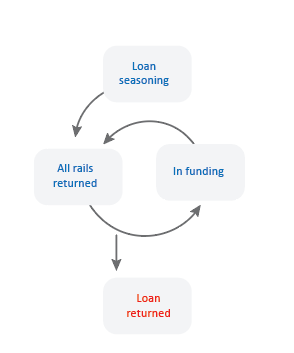 Arix records all the funding attempts and continuously updates the status as each rail is processed, funded, or failed. If the loan wasn't fully funded and is in the status, NotFullyFunded, you can submit new funding information 2 more times. This is also the process for required multiple disbursements over a period of time for a single loan.

You can use the LoanDetail API to follow the progress of the loan. Among the details that are at the bottom of the API:

Note: If a loan was Funded and you have to make changes to the loan, you can send an Adjustment action via PUT /Loan/{Id}/FundingInfo.